That time, the video game industry wasn’t as flourished as today’s, but the franchise Prince of Persia held a pretty dense weight. It was the renowned franchise of action video games, could say that nothing competes it in the pure hack and slash world. And Prince of Persia had also inspired the following action games, transformed the whole action genre. Back then, if you ask some game enthusiasts for Prince of Persia, they definitely know the black-haired prince who slashes his way out of all kinds of predicaments. And the famous wall-running was basically every teen boy’s dream move.

But all of that, was before 2008. When it came to 2008, a new prince emerged from the middle of nowhere desert, and accompanying with a new princess. Fans were really upset Ubisoft didn’t continue our brown prince’s journey, thus in that time, it seemed not quite a game can catch up with its predecessors.

It is a brave new world, with everything changed so significantly that totally contrasts its previous titles. A fantasy world with swords, magic and lore. Color theme is so different from the previous ones.

Fortunately, the prince’s classic wallrunning wasn’t removed. And due to the design, the prince will never die, because the princess has that sort of time reverse ability can save him whenever he falls. Or more precisely, the magic to pull him out of endangerment. And because of this, I once quit playing it because it violates the rules of video gaming – there is death, and there is reload. And never touched it ever since.

Lately, the game once again appeared in my life, out of curiosity and the completionist grand cause, I bought it on Steam and played it once more.

10 years have passed ever since, the second touch of this game everything looks so visually astonishing and aurally soothing. A fantasy exotic land is put right in front of me, with the slick prince and the beautiful Persian princess. The game looks exactly great, I do enjoy my time playing it. Whether it’s the freerunning, the puzzle solving or the plot. With the combination of excellent visuals and audios, I fully fit myself into the tomb raider/prince role. 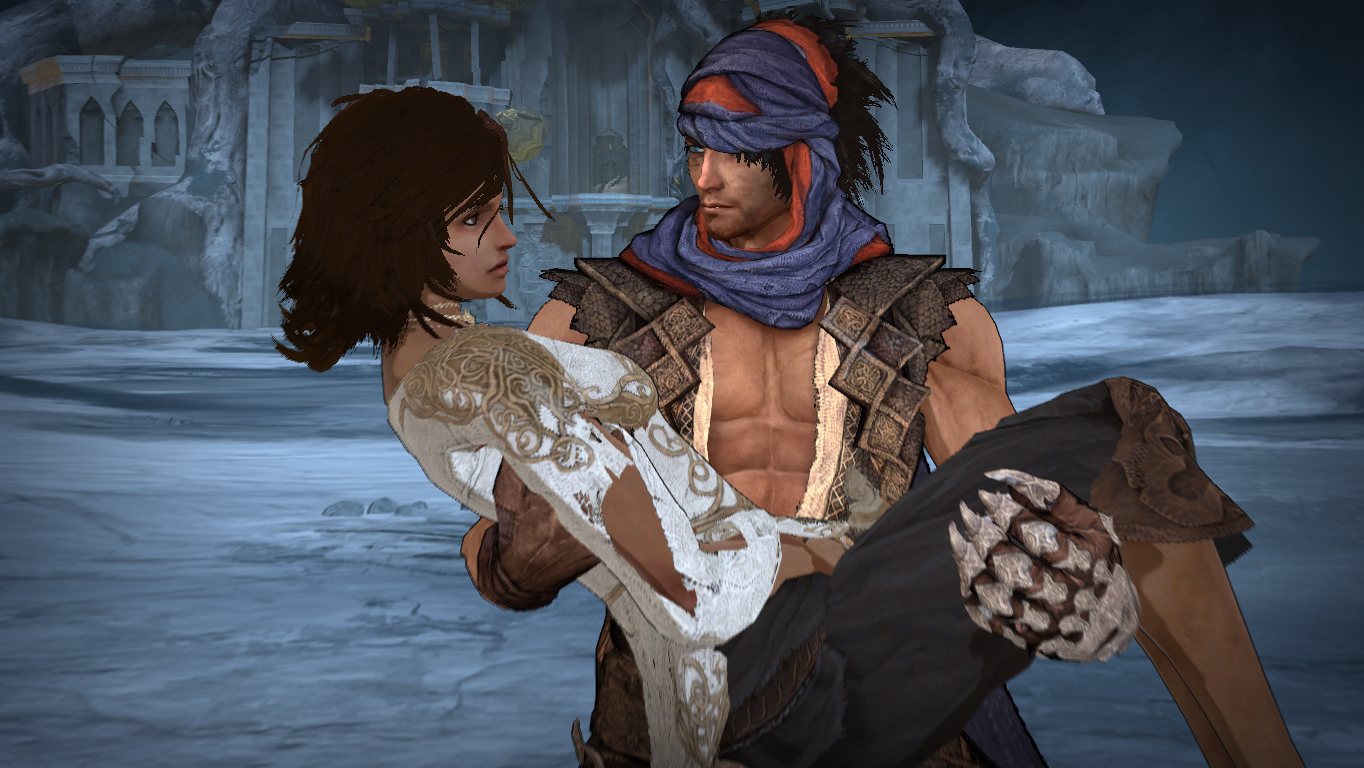 It’s simple, the same time not lacking enjoyments. And I think I have pretty much perceived the fact that the late years how video games have made protagonists invincible. Either it’s Call of Duty, or simply, Ubisoft games.

The game is not like the usual type of action hack and slash, those games would have a character growth system which enables certain skills after you reach certain levels. But Prince of Persia enables the full combo moves at the start of the game, making it all flourishing and stunning at the beginning of the game.
Which, also makes it stale after a certain amount of time. But the combo moves are pretty rich, so takes a bit time to master all, but it’s simply all divided into 5 segments – Elika, Acrobatic, Throw, Lift and Sword. Amongst all I especially love the duo movements – you can add Elika, the princess, into your combo and make up a beautiful duo waltz dance, beating the enemy heart deep.

After heavy combat, let’s now focus on the world design. The world has two statuses, one is corrupted and the other is healed. Respectively presents with dark and cold color theme and colorful and rich color theme. After you defeating 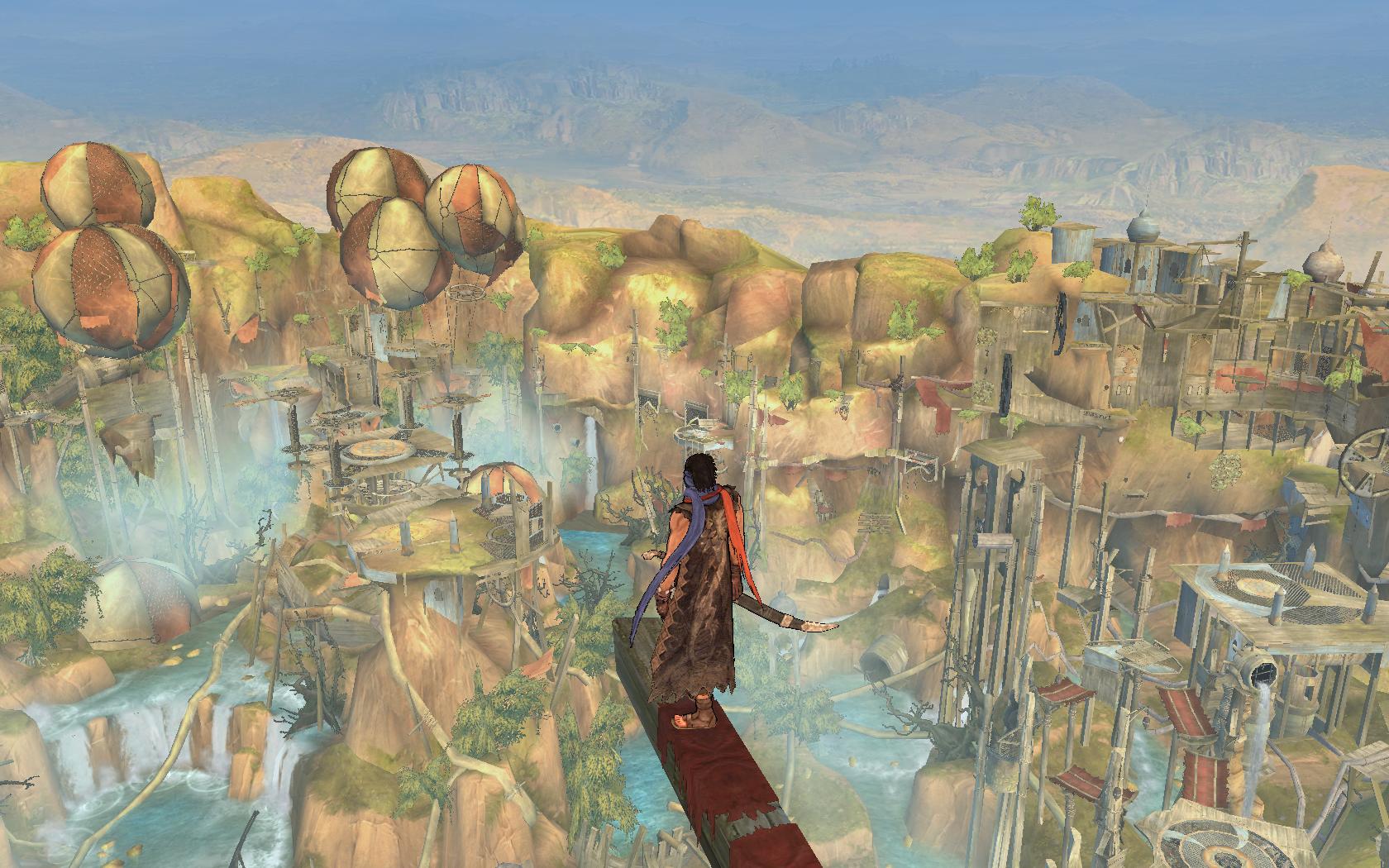 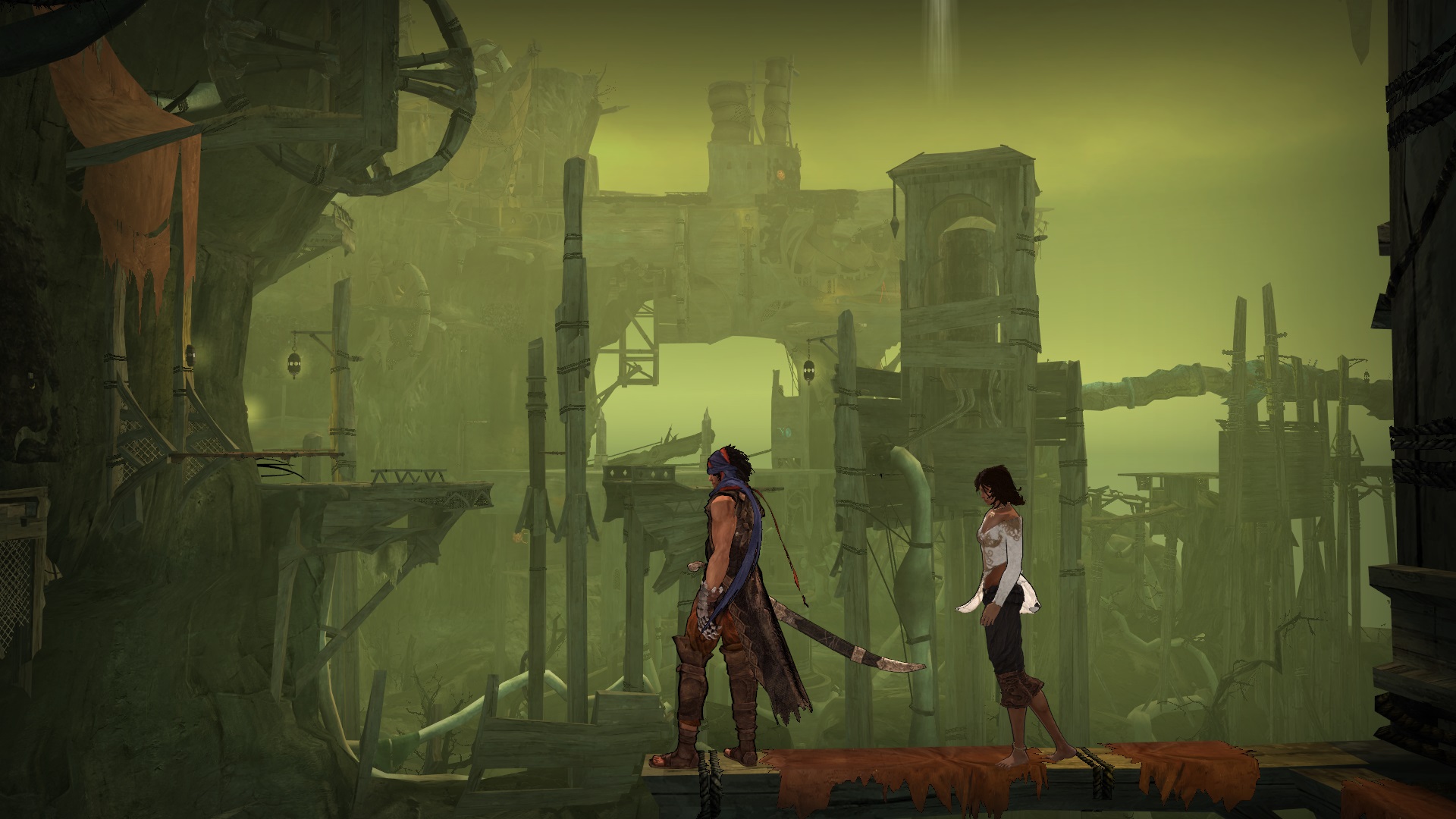 the certain area’s boss, the world would become healed status and opens new paths that are previously blocked. And here, lies in the freerunning.

Freerunning is a big part of this game, I can say that 70% of game time you are doing freerunning: jumping the walls here, wallrunning the walls there. And with the healed status areas, you need to do all the freerunning so that you can collect Light Seeds. In this game, developers especially focus on freerunning so that they added 4 abilities for Elika to be unlocked. After you have collected a certain amount of Light Seeds, Elika can return to Temple and unlock new abilities – activating unusable plates in the world.  These 4 types of plates can do all sorts of imaginative movements across walls and footholds, bringing vast excitement out of flying across the sky. 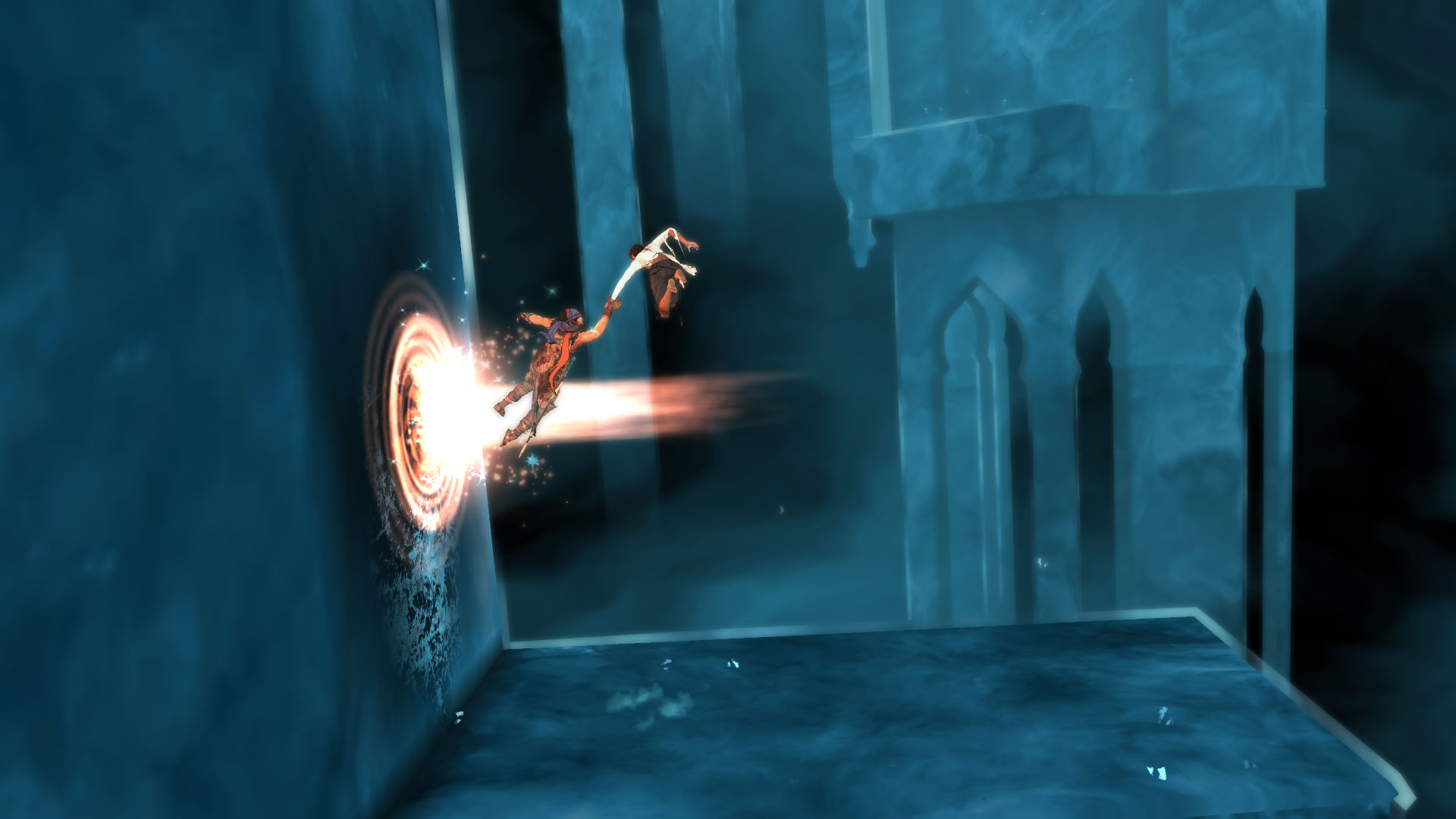 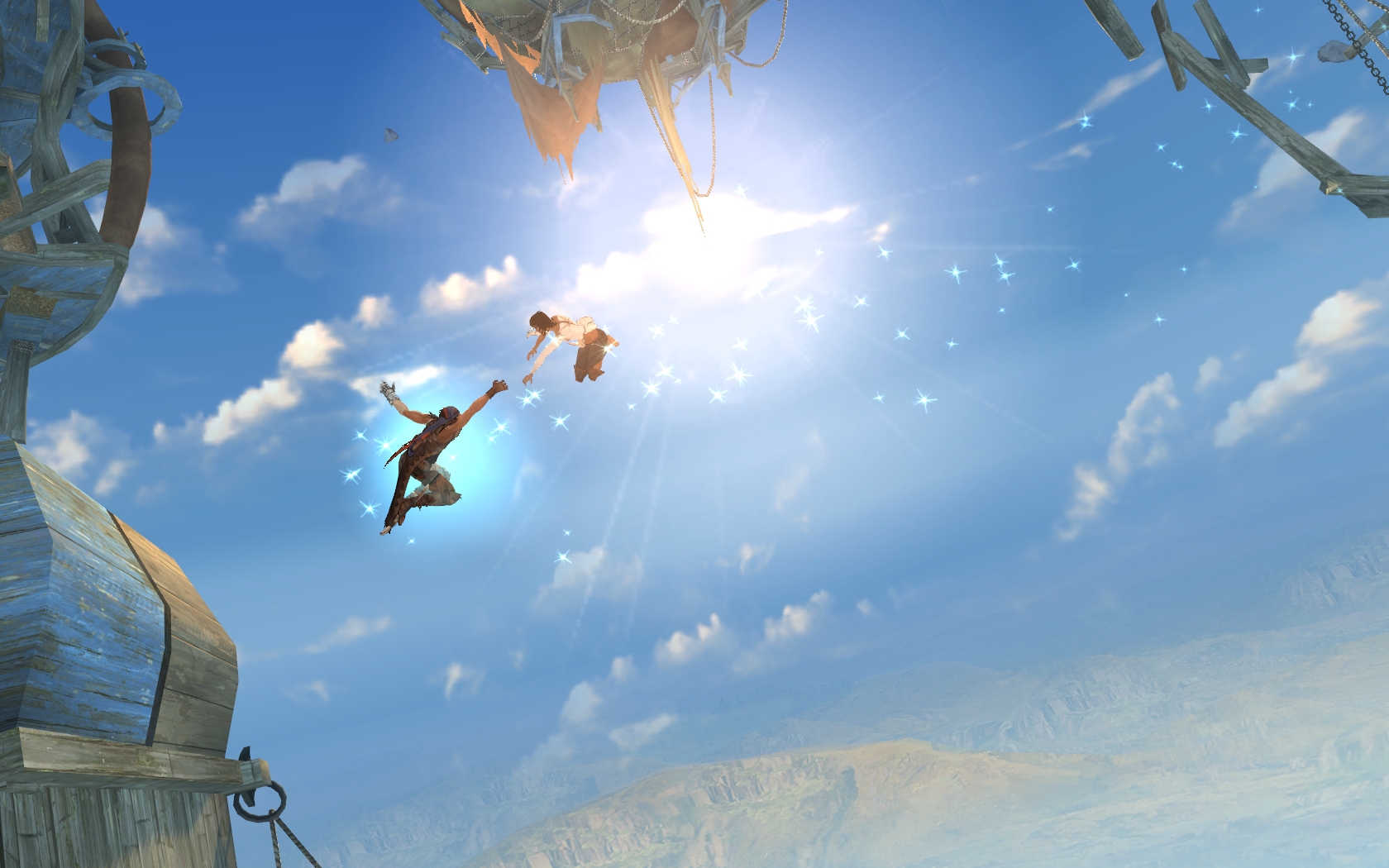 After the freerunning, the game has another segment that is relatively common in the past games. Puzzles. This game gives me the feeling of exactly what a pre 2010 game looks like. Back in the time I was even playing Kung Fu Panda game on my PC. All sorts of puzzle solving, achievements unlocks, it’s niche. Nowadays game has expanded vastly on scope, covers even more, so sometimes you feel like you are not playing a game, but experience a life. But these pre-games, feel exactly like a game.

Whenever we talk about a game, the plot never gets away with it. Prince of Persia’s character development is fine, not great, not epic, it’s just fine. We had a rush introduction on the two protagonists fateful encounter, and then suddenly the world collapsed, and our protagonists had set sail for their long-last world saving journey. It’s cliché, but hell it’s an old game. But slowly did it graduate, the bond between the two had emerged. Here, we hear from the partners conversations we can learn their backgrounds, their stories. But our John Doe prince has never mentioned his name, even though our princess Elika has told so much about her and her country. Maybe it’s just like what he said,

“Where to come does not matter, what matters is where to go.” 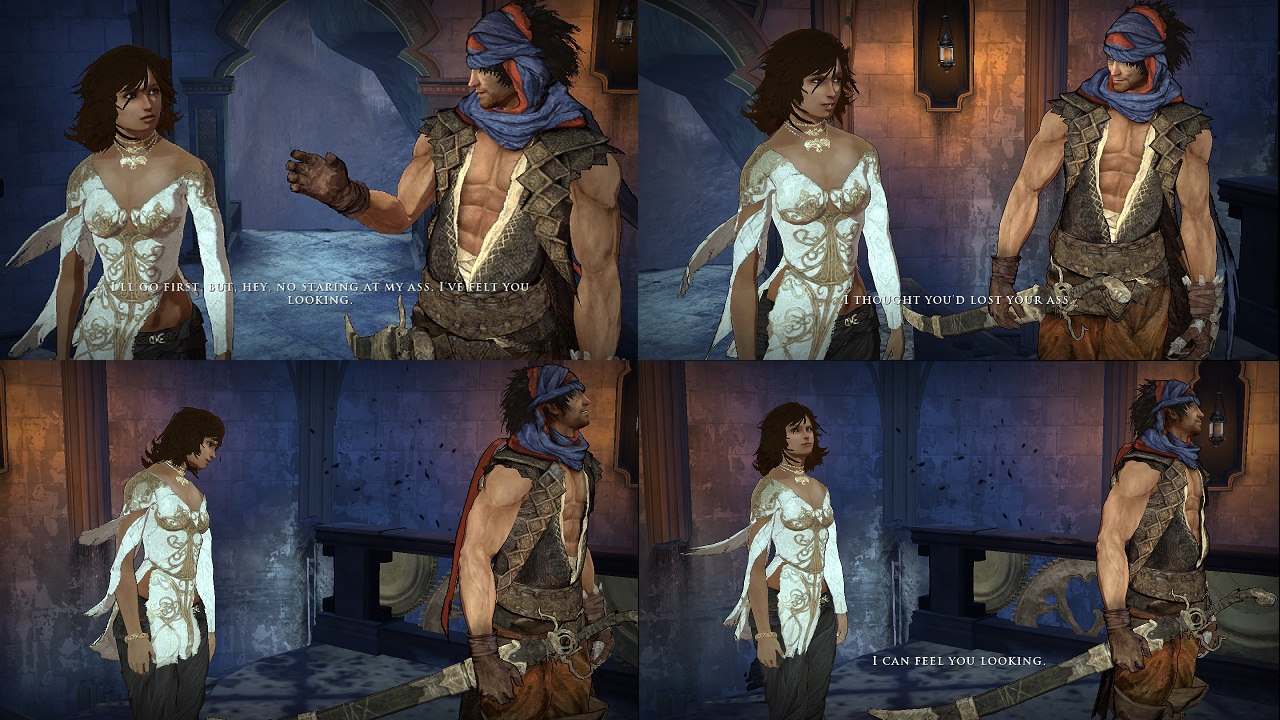 The game fully revolves around these two characters, mostly conversations are also happened between them. From them, we gradually learn about the world settings, the backgrounds, and the history of the world. And sometimes the couple would flirt with each other, and sometimes some wise lines would come out of our “idiot” prince. They make up a lovely couple. Although I strongly doubt the fact that the princess had been a virgin before she met the prince. Wait, she’s still a virgin right?

Conclusion. Prince of Persia is a beautifully crafted game with fascinating visuals and sounds. A very old game, but the quality is solid. 7/10.